Many people rely on over-the-counter medications for treatment of minor injuries and illnesses, even though research shows that these drugs can lead to serious side effects in the long run. Even worse, many people who lead physically active lifestyles continue to push themselves through pain. This is a dangerous practice, as visible symptoms are often signs that more damage is being done to the body. Instead of turning to harmful drugs or masking our pain with exercise, we offer a better solution—natural remedies that help reduce inflammation and promote healing without the use of harmful chemicals. 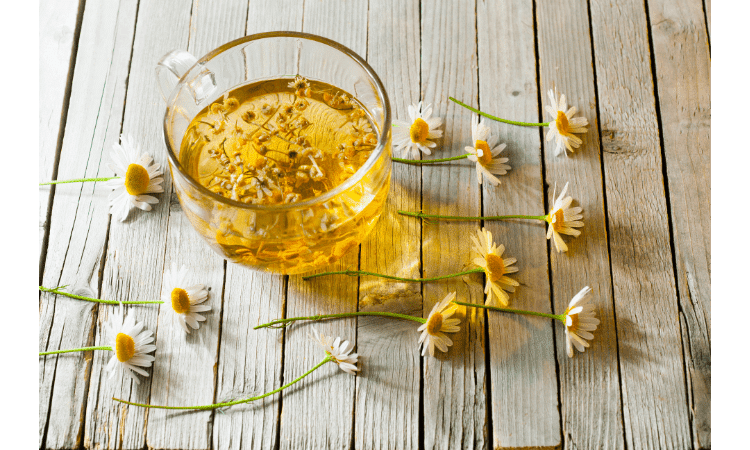 Chamomile is a popular herbal tea that is known to have a calming effect on the body. Chamomile flowers are members of the daisy family and are used for medicinal purposes. In addition to being an effective natural pain reliever, chamomile tea has also been shown to aid in sleeping and relaxation. The dried flowers of the chamomile plant are steeped in hot water and consumed as a beverage or added to other foods such as applesauce or baked goods. 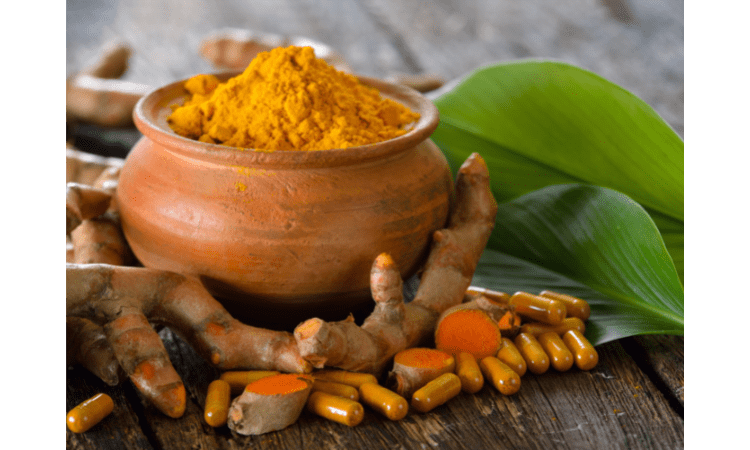 Turmeric is an ancient Indian spice that has been used in traditional medicine for thousands of years. It’s also a strong anti-inflammatory, which can help with all types of pain. Turmeric contains curcumin, which has been shown to have both anti-inflammatory and analgesic effects on the body.

Turmeric may be able to help treat osteoarthritis and other inflammatory conditions like rheumatoid arthritis by reducing inflammation throughout your body. If you have any kind of chronic pain condition, including arthritis or back pain, turmeric could be worth experimenting with as an alternative pain treatment since it’s been proven effective without causing side effects like drowsiness and dry mouth like certain prescription medications can cause (source). 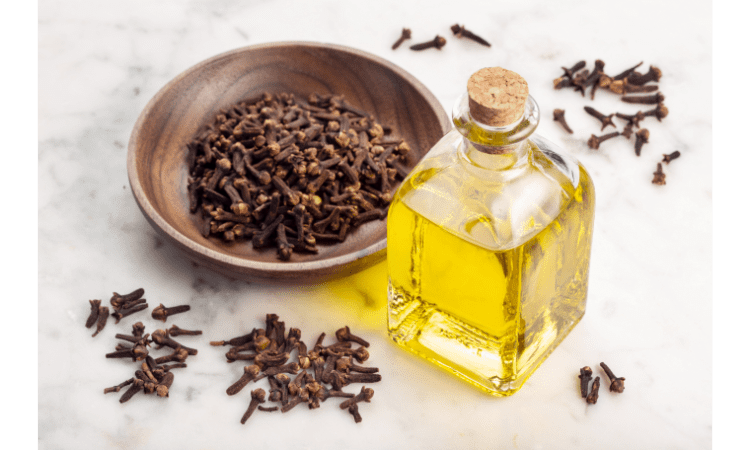 Clove oil is an analgesic. This means that it can be used to treat pain and reduce inflammation. It also helps with the healing process after injuries or surgery, which makes it perfect for treating toothaches and gum pain.

Clove oil works by blocking the transmission of nerve signals from your nerves to your brain. This prevents you from feeling any type of discomfort while using this remedy as well as keeping your teeth healthy! 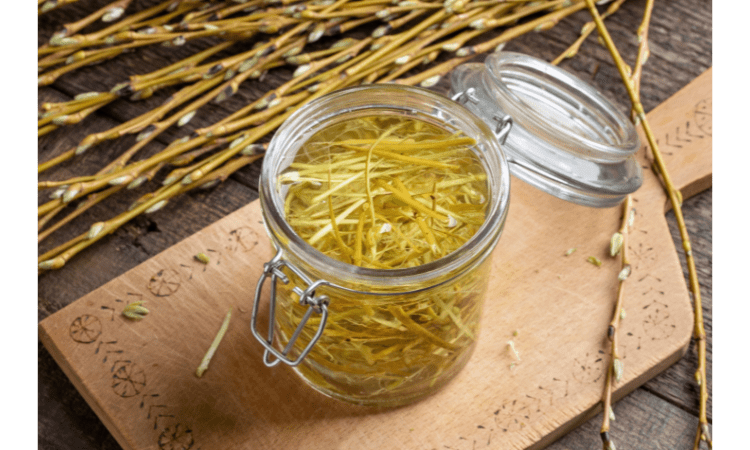 Willow bark contains salicin, a chemical compound that can be converted to salicylic acid in the body. Salicylic acid is a natural anti-inflammatory that’s often used as an ingredient in over-the-counter pain relievers such as aspirin, but it’s also available on its own as an analgesic (a type of drug used to combat pain).

The active ingredient in willow bark is called salicin, which is then converted into salicylic acid by enzymes in our bodies and breaks down into other chemicals that reduce inflammation and ease pain. 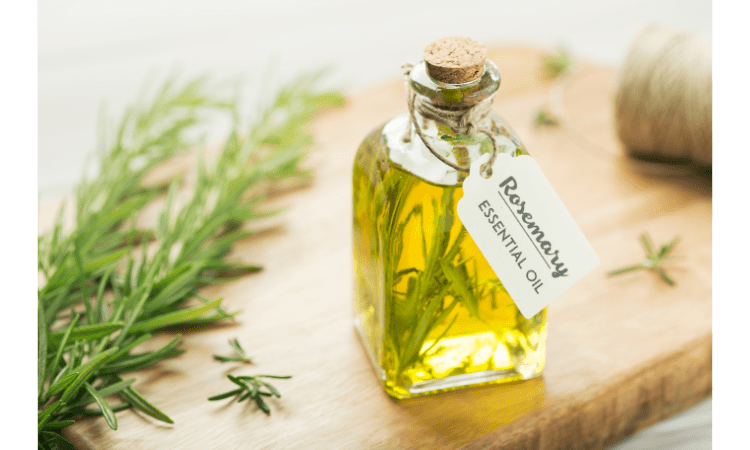 Rosemary is a commonly used herb in cooking and in medicine. The leaves of the plant have been used for hundreds of years to treat respiratory infections and indigestion, as well as stress relief. Rosemary is also high in antioxidants that can help reduce inflammation, which may contribute to pain relief.

Rosemary oil may be useful for treating headaches from tension or migraines, since it contains camphor and eucalyptol that both provide pain relieving properties. 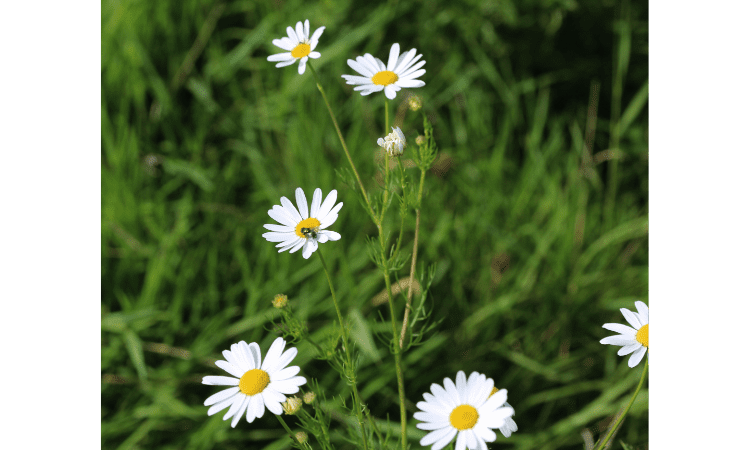 Feverfew is a perennial herb in the daisy family. It’s also known as featherfew, bluebottle and bachelor’s buttons. Feverfew is native to Europe and Asia but has naturalized in North America. The leaves of the plant are edible and have been used for centuries to relieve pain, headaches and inflammation associated with arthritis. 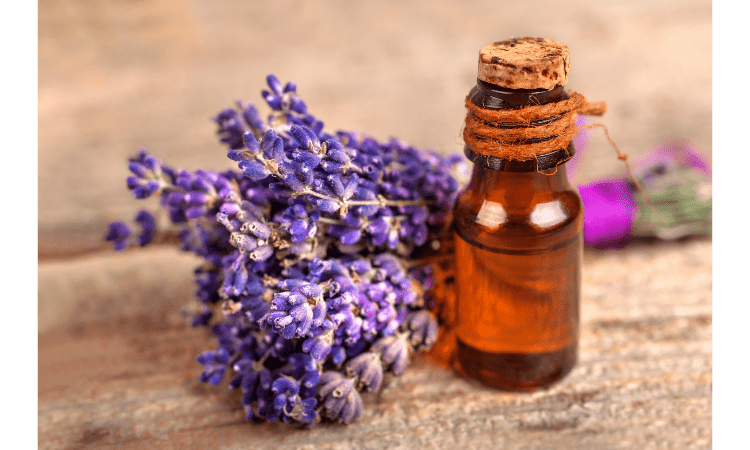 Lavender essential oil is a powerful herb that can be used to help with anxiety, stress, insomnia and pain relief.

The relaxing properties of lavender are known to lower blood pressure as well as relieve muscle spasms and joint pain. Lavender essential oil is also effective at relieving headaches and migraines by reducing inflammation in the brain caused by free radicals. 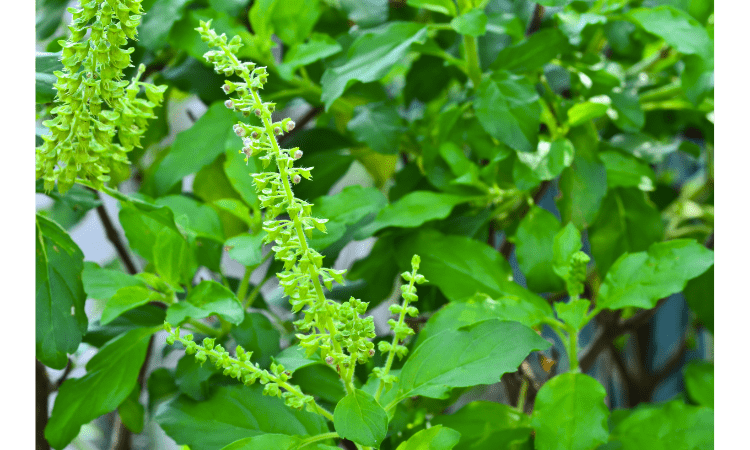 Holy basil is a natural pain reliever and anti-inflammatory. In traditional Ayurvedic medicine, the herb is used to treat everything from fever to headaches and heart disease.

It’s also been shown to be effective in treating inflammation from rheumatoid arthritis and osteoarthritis, as well as reducing inflammatory bowel disease symptoms. 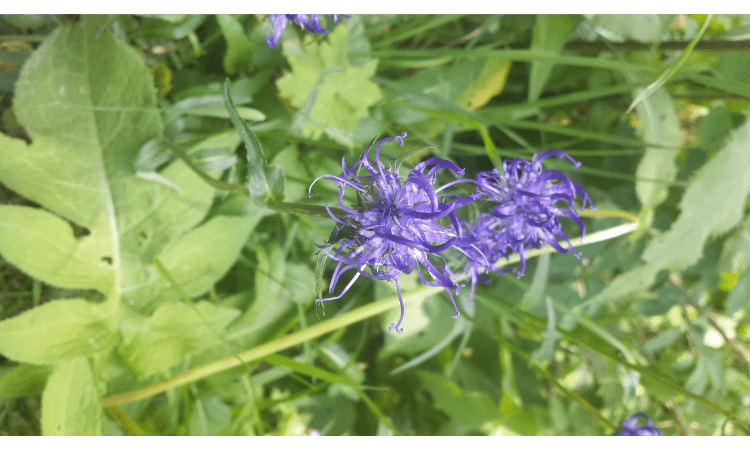 Devil’s Claw is a traditional herb used in South Africa that has anti-inflammatory properties. It’s also believed to help relieve pain, fever, and other symptoms of inflammatory conditions such as arthritis. It can be taken internally or applied externally as an ointment for joint inflammation. 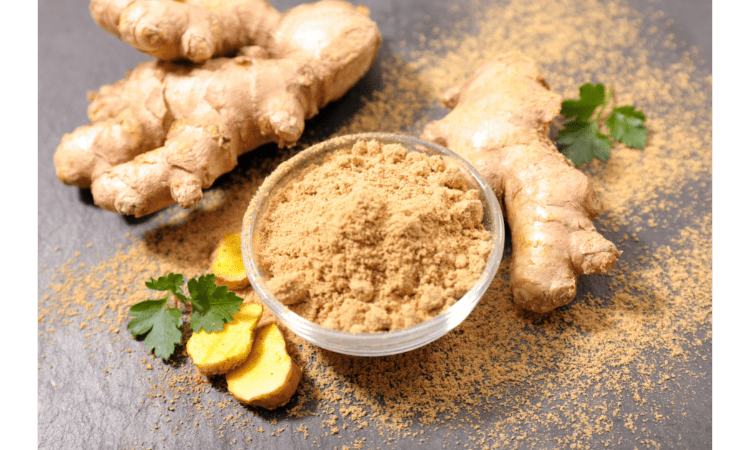 Ginger is a powerful natural pain reliever. It has been used for centuries in Chinese medicine to treat nausea and other stomach problems, but it also has anti-inflammatory properties. In fact, some research suggests that ginger is just as effective as ibuprofen (Advil) at reducing inflammation and pain—and with no side effects!

Ginger can be taken in a variety of ways, such as fresh or dried slices, juice or candied ginger extracts. Mixing ginger powder with honey is another popular way to consume this healing herb; drinking this mixture several times per day can help reduce the severity of arthritis symptoms like joint pain and limited movement. 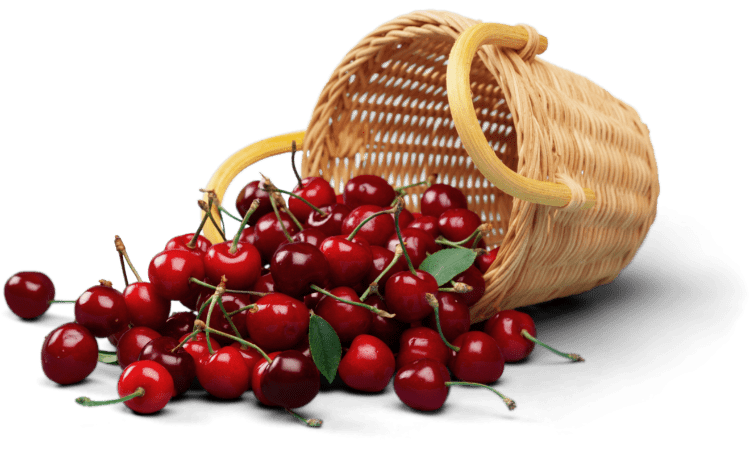 There are many different types of cherries, but most have anti-inflammatory properties. This makes them great at relieving pain and swelling in the body. Cherries can help reduce the symptoms of arthritis, gout, back pain and more. Bing cherries are high in an antioxidant called anthocyanin which has been linked to helping relieve inflammation caused by exercise or injury as well as reducing joint pain that comes with aging. 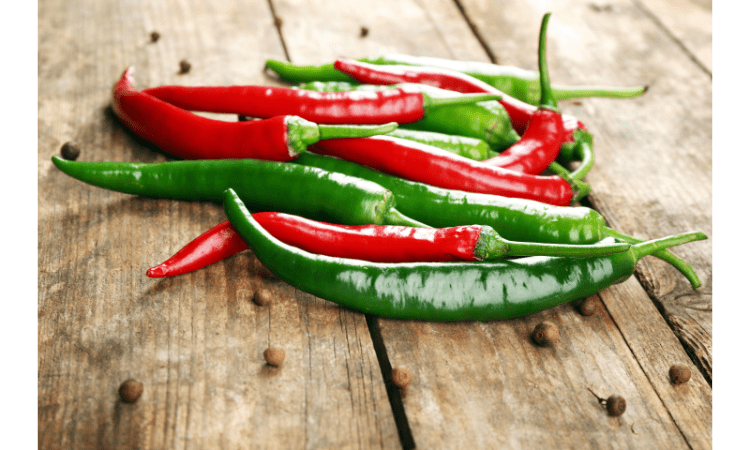 Capsaicin is the active ingredient in chili peppers. It’s produced by the plant when it comes into contact with bacteria or fungi, and it helps fend off predators by causing a burning sensation in the mouth and throat. Capsaicin has been proven to be effective against several kinds of pain.

Capsaicin can be used as an over-the-counter topical cream that can help ease arthritis pain and muscle soreness, as well as nerve pain associated with shingles or diabetic neuropathy. It also works well on its own when applied directly to affected areas such as joints or muscles (after first removing any clothing). Research shows that capsaicin may reduce arthritic symptoms by up to 25% after six weeks of use. 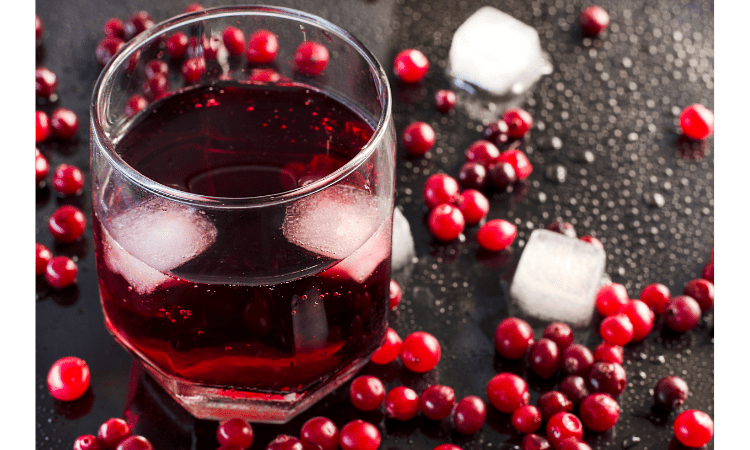 Cranberry juice is a natural diuretic, which means it can help you urinate more frequently. While this may not sound like the most fun thing in the world, it’s actually great for your body. When you have an infection or irritation in your urinary tract, you need to get rid of as much bacteria and waste as possible. Cranberry juice helps flush out these toxins so that they don’t irritate or infect other areas of your body. It’s also an anti-inflammatory, so drinking cranberry juice can help reduce swelling and redness around the area where you’re feeling pain (like from a UTI). 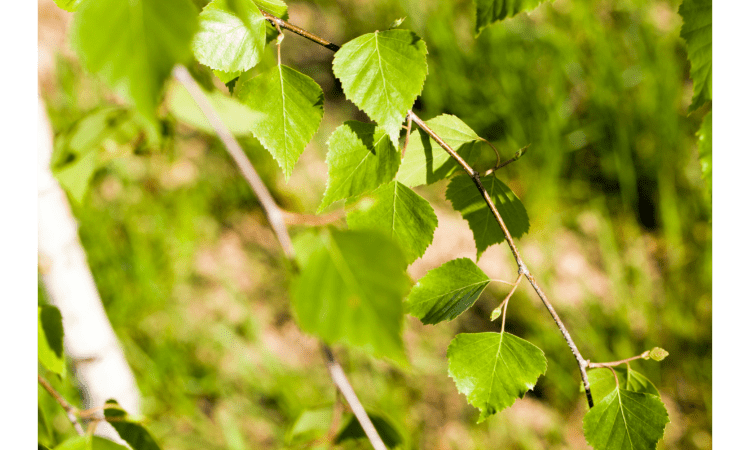 The leaves are often used to relieve the symptoms of colds and flu and have been traditionally used by Native Americans to treat sore throats, coughs and bronchitis.

To use birch leaf as a natural remedy: 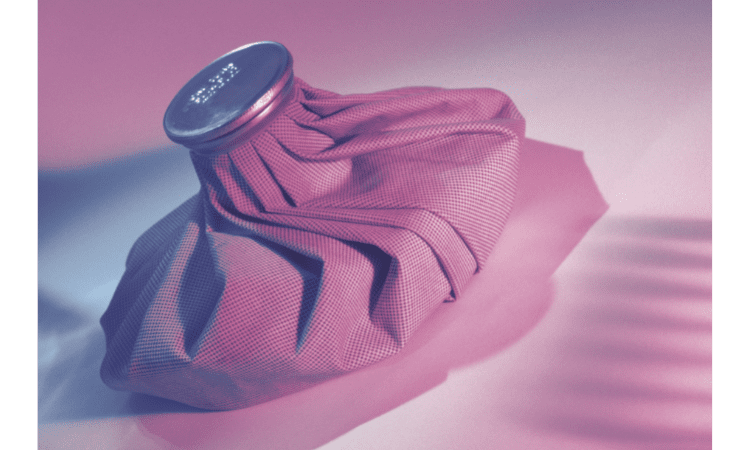 Heat and ice are both effective methods for reducing pain, but they have different mechanisms of action. Heat relaxes the muscle to relieve tension and ice reduces inflammation. However, heat should be used in moderation because it can cause skin damage if left on too long. Ice is generally more effective at relieving acute pain than heat because it reduces inflammation by constricting blood vessels and reducing swelling. Both treatments should be limited to no more than 15 minutes at a time to avoid overuse injuries or tissue damage.

The simplest suggestion for those interested in exploring natural pain relief is to explore the options available. There is no one-size-fits-all approach to natural remedies, and what works for one person may not work for another. This can make it difficult to arrive at a definitive conclusion about which option is best, but there are some key considerations that can help you choose. For example, if you have a problem with irritable bowel syndrome (IBS) or other digestive issues then peppermint oil might be better suited than ginger capsules due to its ability to calm down these conditions.